Data engineer vs. Data scientist- What does your company need?

Data engineer vs. Data scientist- What does your company need? 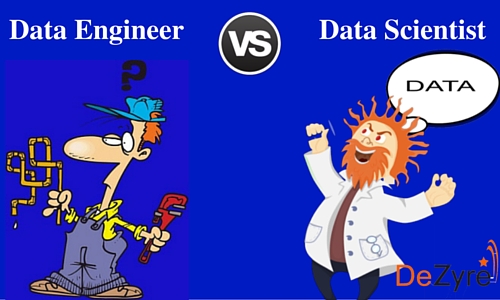 To ease the confusion, people have about the two popular data science job roles, here is a simple blog that helps you understand the differences between the two - Data engineer vs. Data scientist. This article aims to help the readers decide the best data science job role- data engineer or data scientist for themselves, based on their skills and career goals. If you are beginning a career in the big data industry and have set an end goal to become a data scientist, then the foremost step is to master the skills of a data engineer. This article might not join all the dots for you but the ultimate motive is to help you think about this so that you take the right career path.

“A data scientist figures out how to recommend products for you on Amazon, how to order the posts in your Facebook stream, and how to suggest the next music track in Pandora. Google has lots of software and countless servers powering its services; the data engineers are the ones who build and maintain all of it. They will likely work with Hadoop, MapReduce, Storm, and all the other Big Data technologies out there, depending on the needs of the project.”- said Bob Moore, CEO, RJ Metrics, a big data analytics firm. 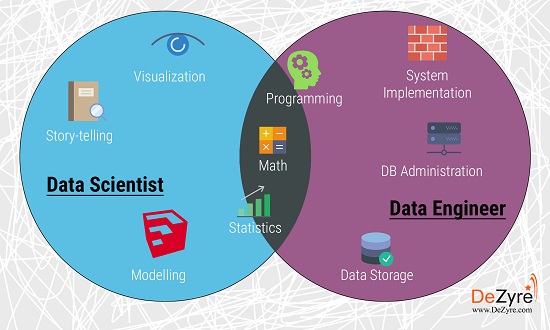 Who is a Data Engineer?

“A software engineer with decent understanding of math and statistics.”

Data engineers are professionals who provide a platform for modelling data. The job role of a data engineer involves gathering, storing and processing the data. Data engineers possess excellent software engineering skills, in-depth knowledge of databases and familiarity with data administration. The core value of a data engineer is their ability to construct and maintain data pipelines, that helps them distribute information to data scientists. With good understanding of algorithms, data engineers can run basic learning models. However, as the complexity of the underlying business problem increases, professionals need to run more sophisticated machine learning algorithms. This is where the skills of a data engineer become limited and organizations need to hire data scientists.

Data engineers wrestle with the difficulties of database integration and messy unstructured big datasets. The end goal of a data engineer is to provide clean data in usable format to data analysts, data scientists or whosoever might require.  To sum it up, data engineers are data geeks who lay the foundation for a data scientists to work easily with the data needed, for their calculations and experiments.

Responsibilities of a Data Engineer

Key Skills of a Data Engineer

Tools a Data Engineer Must Know

The tools and skills that are utilized by data engineers are mostly dependent on which part of the data pipeline they work on. For example, if a data engineer is at the rear end of the data pipeline, which requires building APIs for data consumption, integrating datasets from external sources and analysing how the data is used to nurture business growth - then knowing a language like Python is enough. Any code related to data ingestion from other providers can be written in Python programming language. Python is a robust language and can talk to any data store like NoSQL or RDBMS. Data engineers might have to use big data technologies like Hadoop and Spark to suggest improvements based on how data is consumed.

Some of the important tools a data engineer must know include-

Core Tasks of a Data Engineer

Who is a Data Scientist?

According to an industry observer, companies are looking to hire data scientists who can do a lot more than just code -

“What we need are data scientists who bring more to the table than just mathematics and code. We need to find the people who can make data a thread that runs through the entire fabric of the organization.”

A data scientist, networks with both clients and executives of the organization, to deliver data driven insights. The end goal of a data scientist is to build data products and present those to the various stakeholders of the business. A good enterprise data scientist is the one who customizes and changes the machine learning models after they have been built to meet the constantly changing business requirements.

Key Responsibilities of a Data Scientist

Must Have Data Scientist Skills

Tools a Data Scientist Must Know

Core Tasks of a Data Scientist

Data Engineer vs. Data Scientist- The differences you should know

A data scientist begins with an observation in the data trends and moves forward to discover the unknown, whilst a data engineer has an identified goal to achieve and moves backward to find a perfect solution that meets the business requirements. Data Scientist job role is more like a research position whereas the job role of a data engineer is more inclined towards development.

Many data engineers are involved with complex data transformations and writing machine learning code but it is not the skills they possess that make them different, it’s the focus. The main focus of a data scientist is on the data mining task or statistical modelling whereas a data engineer emphasizes more on cleaning the data, coding and implementing the machine learning algorithmic models that have been perfected by data scientists.

Recruiters today, while hiring a data scientist, look for statistical knowledge and supreme programming skills in tools like Python and R for applied mathematics. Considering the fact that it is very difficult to find a “unicorn” (one can expect a very senior data scientist to be a unicorn) but professionals who can outshine the coding skills of a data engineer can begin their career as a junior data scientist. There are very few data scientists who have a very good business acumen so they tend to occupy the gap between a data engineer and a business analyst. A data scientist helps both, by using the skills that neither of them has, without having to be a unicorn.

Data Engineer vs. Data Scientist- The similarities in the data science job roles

Having understood the differences, it is necessary to understand, that at times there is an overlap in these two data science job roles based on the business and the structure of the IT department. In several situations, organizations might require the data engineer and data scientist to handle all the statistical and math related calculations for data analysis. Both might also be required to program for big data applications and databases.

There are several options when it comes to working with a career in big data. If you are interested in exploring one of many such data-related careers, then please drop a mail to anjali@dezyre.com or let us know in comments below.