Hadoop- The Next Big Thing in India

Hadoop- The Next Big Thing in India


IT is a lucrative career option offering high paying jobs but it is an ever changing job market. Big Data Hadoop skills are most sought after as there is no open source framework that can deal with petabytes of data generated by organizations the way hadoop does. 2014 was the year people realized the capability of transforming big data to valuable information and the power of Hadoop in impeding it. With Hadoop becoming the go-to technology for big data processing, it is overwhelming different innovations across various industries. As the Indian Big Data Hadoop industry anticipated to grow by five-fold in the next few years, 2015 will sense an increased temptation of excellent job prospects for professionals with big data skills in the analytics sector. Take a look at how is the future demand and job market for Big Data Hadoop skills in India.

Demand for Hadoop in India

According to The Hindu – By end of 2018, India alone will face a shortage of close to 2 Lac Data Scientists.Gartner predicts, a significant gap in job openings and professionals with expertise in big data skills. Thus, 2015 is the right time for IT professionals to make the most of this opportunity by sharpening their big data skill set.

A research report by Avendus Capital estimates that the IT market for big data in India will reach $1.15 billion by end of 2015 owing to one fifth of India’s KPO market of $5.6 billion. The big data market leader - US is anticipated to experience a shortage of 140,000-190,000 big data professionals by end of 2018, which will open up immense opportunities for product and service companies in India.

The prospective growth for big data in India is because of-increasing number of companies trying to get meaningful insights out from the massive data growth in their businesses. Big data business is everything about storing, processing and analysing unstructured data like videos, photos, tweets, Facebook comments and other social media updates together with figures and facts that help companies increase their ROI and is now one of India’s skill in demand. India is considered the favourite outsourcing destination for Hadoop skills attributed to the highly talented IT professionals, operational efficiencies and low cost. 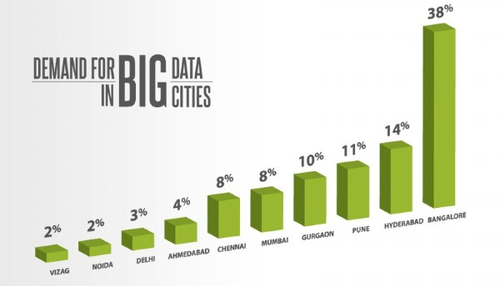 Arun Murthy, founder of US-based Hortonworks said - "After Silicon Valley, Bangalore has the largest number of people with Hadoop skills. The talent pool is huge.”

The city of Bengaluru popularly known as the Silicon Valley of India has close to 2339 Hadoop enthusiasts while Silicon Valley has approximately 2552.India boasts of 6561 Hadoop users across the four metropolitans whilst US has 8475 Hadoop users spread across San Francisco, Boston, New York and San Diego. The increase in the number of Hadoop experts in India is powered by some of the India’s billion dollar successes like the online retailing giant Flipkart and the mobile ad network InMobi.

"Hadoop is de-facto at Flipkart. We have made significant investment in data intelligence.”-said Sharad Agarwal, principal architect and one of the founding members of Hadoop 2.0.

For InMobi that generates 5TB of data every day and processes close to 240TB of it - Hadoop is a very vital component.

Twitter has recently announced its plan of setting up its R&D centre in India.

With the Hadoop hype accelerating in the big data market in India, software engineers are opting for it as an area of specialization.Most of the big data companies are looking to hire competent data scientists and engineers. The talent pool for Hadoop skills is frugally low when compared to the increasing demand. It is hard to neglect the fact that a big data savvy professional can earn as much as $90,000 - $180,000 depending on his experience and role. The current zest for big data skills mainly concentrates on various technologies that make taming big data easy such as –Hadoop and its related open-source tools like Spark, Flume and Sqoop, data visualization and cloud computing.

Know more about our Online Hadoop Training to join the top big data companies in India.

Big Data and Hadoop –Growth for Outsourcing in India

A McKinsey research report predicts that retailers that leverage the complete big data potential along with trends from social media data such as LinkedIn, Facebook, and Twitter can improve their marginal operations by close to 60%.

For Indian IT industry as whole, big data and Hadoop are the next big things arriving at an opportune moment. The revenue numbers though might seem small but the demand for big data skills is outpouring.

“We think this is just the tip of the iceberg. The world is only going to change faster and faster and faster. There will be more data, more algorithms, more applications, and more new technologies. It’s like hiring a bunch of Tony Starks, train them on the Iron Man Suit and they go out and defeat the bad guys.”- said Dhiraj Rajaram from Mu Sigma.

India’s success in the big data market will depend on maths-savvy software engineers and the various skills India’s IT industry has grabbed in the last 15 years being world’s biggest IT outsourcing destination.

Palo-Alto based Hadoop vendor Cloudera considers India as an emerging market for big data products. Cloudera has announced its plan to offer the products in India at comparatively lower prices than other developed big data markets to grab the attention of big data companies to make it attractive for enterprise adoption in India.

“The Indian cost benefit is eroding significantly. In the big data analytics space, it will be more about talent arbitrage. Good statisticians who have a blend of business acumen and analytic skills and also technical aptitude aren’t inexpensive, even in India.”- said Mahinder Mathrani, operating partner at the Symphony Technology Group.

As TimesofIndia evidently mentioned their article on Hadoop that- “As the world moves to a digital age, there is literally an explosion of data and Hadoop makes it possible to stay on top of it. If a few years ago, megabytes and gigabytes used to be the extent of data, experts are now talking of several petabytes.”

Having analysed the forecast of big data market in India and the immense opportunities it has for IT professionals, it looks favorable and the upward trend is likely to increase over the period of time. Hadoop market in India is not a short-lived marvel and big data technologies like Hadoop are here to stay. In fact, Hadoop has great prospective to improve the job prospects along with the salary component regardless of the fact that a professional is a fresher or experienced.

With every major IT giant , be it Flipkart, Facebook, Jabong, or Snapdeal using Hadoop for analysing zetabytes of data created by their million customer base every second –mastering Hadoop skills will be considered as the next big dream frontier for any developer in India. Big data companies in India are betting big on IT professionals who can augment the value of their competitive plans by leveraging big data analytics efficiently.IT professionals can make big in this inflating world of Big Data in India by gaining expertise in Hadoop and other big data technologies to sparkle with brilliance. It is time for Indian software application developers to include Hadoop in their list of skills. Strike the iron when it is hot…