According to Dice, the number of NoSQL jobs for people experienced with unstructured database systems like MongoDB has increased by 54% over last year. A recent survey conducted by Dice estimates that salaries for employees who use Hadoop and NoSQL are more than $100,000.This figure is considerably higher than the overall average IT professional’s salary of $85,619.

Job trends graph of Indeed.com lists MongoDB as the most commonly mentioned NoSQL variants in job listings with close to 4979 entries. The three next most common NoSQL variants are Couchbase, CouchDB and Redis. 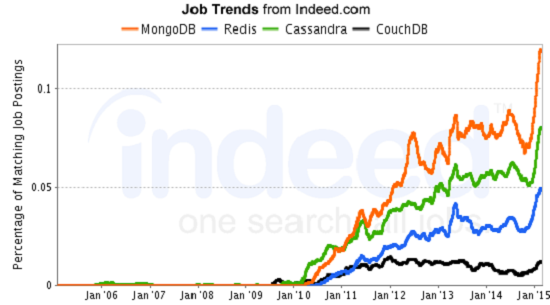 According to 451 Group, LinkedIn Skills index exemplifies that MongoDB accounts for 49% of all the mentions about  NoSQL databases in LinkedIn profiles.

"The launch of MongoDB certification is a response to the widespread adoption of our NoSQL database and the increasing importance employers are placing on MongoDB expertise."- says Andrew Erlichson, Vice President of Education & Cloud services at MongoDB.

“Big Data” is revolutionizing the world and an SQL solution is very expensive to tackle the evolving business demands.With 80% of data being unstructured, data management requirements cannot be effectively met with expensive relational database management systems quickly. Companies are realizing the need for alternative NoSQL databases like MongoDB to develop operational applications that can drive business engagement at one tenth of the cost over RDBMS. With MongoDB in action, organizations can do things they could have never done before with a RDBMS and make a difference to the business.

MongoDB claims to be one of the biggest big data vendors with 400 employees, 2000 customers across the globe, close to 850 technology service partners that are increasing by 70% year-over-year. One third of Fortune 100 companies are employing MongoDB NoSQL database for mission critical big data applications.

Among the various NoSQL databases available, MongoDB has matured because of its increased familiarity and usage. The balanced approach MongoDB follows is best suited for a wide range of big data applications with changing business and customer demands. The functionality of MongoDB NoSQL database is close to that of a relational database management system but with an additional provision to capitalize on the advantages of cloud infrastructure through horizontal scalability-so that users can easily work with large data sets through flexible data model.

The skewed success of MongoDB is because of its modernization as a data structure store that allows developers to model data sets at the heart of applications. MongoDB vividly eases the process of application development by eliminating the different layers of complex mapping codes.

"MongoDB certification offers developers and DBAs a new means to prove expertise on MongoDB and helps organizations hire and develop qualified professionals. These credentials recognize individuals with proven knowledge of the concepts and mechanics of the database and practical skills required to build applications backed by MongoDB.”- Says Shannon Bradshaw, Director of Education at MongoDB

MongoDB University certifies candidates who can run and create applications on MongoDB for two roles – MongoDB Application Developers and MongoDB Database Administrators (DBA’s). The certification is accredited to the candidates at 3 different levels-

A certified MongoDB application developer will possess expertise in at least one programming language that is linked to MongoDB driver with detailed understanding of the application programming interface of MongoDB, MongoDB CRUD operations, basic scaling, and schema design.

A certified MongoDB DBA has expertise knowledge in run-time configuration, monitoring, processes, scaling, performance tuning, and backup and recovery of various MongoDB instances in production. MongoDB University for now has rolled out MongoDB certification only for the Associate level and plans to roll out the next 2 credential levels sometime soon in future.

According to a recent survey conducted by CompTIA on IT certifications-

With numbers like these, nobody would you like to take the risk of marking down the validity of MongoDB certification.  MongoDB was chosen as the leader in NoSQL databases for 2014 by Forrester Research making MongoDB Certification worth including in your profile. MongoDB certification helps employers identify database administrators and developers with the expertise knowledge needed for developing and maintaining MongoDB applications.

MongoDB NoSQL certification can place you in par with the industry requirements to mastermind a large database migration or lead a new big data project.

Most of the popular Internet giants like LinkedIn, Amazon, Google, Twitter and Facebook have spun to NoSQL databases in a big way leading to the growth of upstart database technology. Organizations like eBay, Amazon, Cisco, Facebook and Disney have high volumes of database production deployments of MongoDB. Organizations like the Guardian have a dedicated prototype for novel projects on MongoDB NoSQL databases popularly known as the “Mongo First” values.

“Enterprises that learn MongoDB can amortize their investments in MongoDB across many, many projects, making it one of short list of standards they rely upon for all data management”-says Kelly Stirman- Director of products at MongoDB.

NoSQL Startups like HBase, 10gen, DataStax are adopting novel technologies like MongoDB, Dynamo, CouchDB, Cassandra to render cloud based open source tools to all vertical industries from e-commerce to telecommunications. Large engineering companies make use of MongoDB as the back-end for advanced analytics products and social communications. With the right proficiency and MongoDB certification, professionals can build and maintain MongoDB applications.

How to prepare for MongoDB Certification?

When it comes to  MongoDB NoSQL database, theory is nothing if it is never applied. The most excellent way to prepare for MongoDB certification is to get hands-on experience in working with MongoDB. There are several online academies providing NoSQL courses that cover MongoDB essentials. Make sure that you enrol for a MongoDB NoSQL course that provides you experience on how to integrate MongoDB in future software applications.

If you have any questions related to NoSQL course or would like to know more about the IBM accredited NoSQL Certification course from DeZyre, please email our lead counsellor rahul@dezyre.com