“Knowledge without application is like a book that is never read”

At DeZyre we are committed to connecting Industry Professionals with the rest of the world – so that people can benefit from the expert’s insights. In view of the above we have launched Industry Interview Series – where every month we interview someone from the industry to speak on Big Data Hadoop use cases.

We had the pleasure to invite Garima Batra, a core platform engineer at MobStac involved in the development of Beaconstac iOS SDK to speak on “How IoT leverages Hadoop?” MobStac is a proximity marketing and analytics platform for beacons. The main goal of MobStac is to help users consume Internet on any connected device by speeding up the creation of mobile Internet content and delivering it to a broad range of audience.

You can click on the link below to listen to the recording of the recent webinar on “How IoT leverages Hadoop” presented by Garima Batra.

The webinar discusses about the working of beacon technology (Beaconstac) and the production beacon analytics system Morpheus at MobStac that leverages Hadoop for analysing huge amounts of unstructured data generated from beacons (IoT).Beacons are small sized Bluetooth nodes that tell a smartphone or tablet about the exact location of the device so that any mobile app can trigger a specific event on that specific location (pushing location triggered notifications)MobStac provides a beacon agnostic proximity marketing and analytics platform for developers popularly known as the “Beaconstac”. Beaconstac platform developed by MobStac helps developers to deliver proximity-aware experiences in mobile applications by deploying beacons. 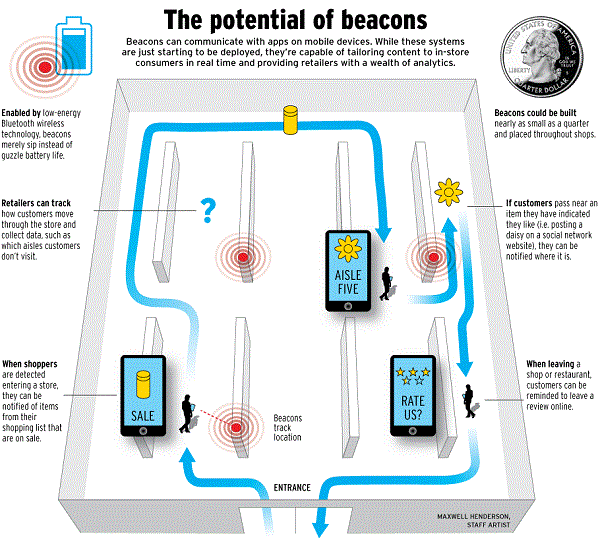 2015 is the year of beacons as they revolutionize the manner in which unstructured data from IoT sensors can be analysed.Beacons are making waves in the mobile application market as increased number of enterprises across various vertical industries are adopting beacon technology. Theme Parks, Restaurants, Museums, Airports, Hotels, Sports Stadiums, Events and Shopping Malls are deploying beacons on their premises for leveraging analytics to accelerate their business forward.

For instance, your Samsung Galaxy S6 might make use of a beacon in your car to identify that it is your car to send an unlock signal to the car. Your new iPhone 6 may use a beacon to show on a map where exactly you are located so that it can help you with the directions to your destination. Your Google Nexus might make use of a beacon to find out in which sections of the Walmart store you are in and find out if there is anything on your shopping memo in that section just to ensure that you don’t forget purchasing that item.

The opportunities with MobStac’s Beaconstac platform are merely limitless if we analyse the scope beacons have in different industry verticals. These tiny IoT devices (beacons) have great potential to form an integral part of any enterprise’s digital strategy.

According to Gartner research report, the number of wirelessly connected devices will reach 26 billion by end of 2020. 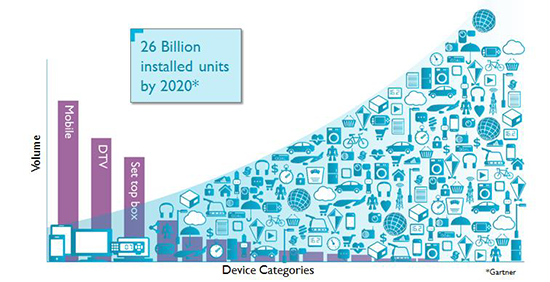 A research by Cisco estimates the Internet of Things (IoT) will bring global businesses a profit of close to $14 trillion.

Economist study found that 95% of business leaders will leverage Internet of Things in the next 3 years.

Big Data and the Internet of Things (IoT) are two of the biggest tech waves that revolutionizing the way we live and work. Internet of Things is referred to a scenario in which objects have unique identifiers with the ability to transfer unstructured data over Internet without any interaction between human and computer. IoT can be referred as concept of universal networking of connected devices to simplify communication between the devices themselves and also between humans and devices.

IoT has advanced by the merging of micro-electromechanical systems, wireless technologies and the Internet.The heart of all the technology revolutions happening with IoT comprise of 5 things-Wireless, Big Data, Cloud, Devices (IoT) and Security.

Internet of Things are literally present everywhere from adorning shoes, clinging to jogger’s wrist, and hanging from your phone. IoT and connected devices are continuously counting the number of steps you climb, your heart rate, counting the number of calories, managing your golf swing and collecting unstructured data about your movement on a daily basis. 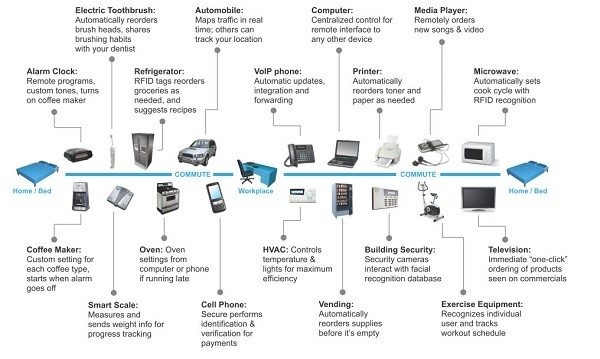 The Internet of Things (IoT) is an emerging trend in big data market. In the early 1990’s 1 billion users were connected to the fixed internet wave which increased to 2 billion user in 2000’s. IoT has the prospective to connect close to 30 billion Internet of Things by 2020 ranging from cars to bracelets. With decrease in computing power, novel sensors are being developed and increased number of companies are buying into IoT technology.IT giants like IBM and Intel are expanding to make big data and Internet of Things(IoT) easier and more accessible by implementing IoT connected devices into their operations.

Want to know how to learn big data hadoop online?

IoT +Big Data+ Hadoop = A Perfect Match Made for One Another

"The success or failure of the Internet of Things hinges on big data.”- says Brian Hopkins, Forrester Research Analyst.

“Once the Internet of things gets rolling, stand back. We’re going to have data spewing at us from all directions - from appliances, from machinery, from train tracks, from shipping containers, from power stations. If that doesn’t get you thinking how to handle real-time data feeds, nothing will.”- says Howard Baldwin, Forbes Contributor

With enterprises stepping into the world of IoT, the symbiotic relationship between IoT and big data is being extensively leveraged for profitable business decision making. Internet of Things is more about data than devices.Big data and IoT are like strategic partners, as it is not just enough to collect data from IoT, enterprises have to process and analyse it to garner big data insights for improving business operations.

The nature of data IoT devices generate lends itself to employ the big data approach for analysis.Hadoop’s MapReduce API is used for processing data generated from IoT in a scale-out fashion on commodity hardware.

“The biggest challenge is that the IoT has the potential to generate orders of magnitude more data than any other source in existence today. So, in the world of the IoT we will test the limits of ‘big.’”- says, Bill Franks-Chief Analytics Officer at Teradata

Enterprises can gain profitability by utilizing IoT, however leveraging IoT with Hadoop helps organizations make the most of everything that IoT has to offer. With increased number of devices being connected to the IoT, petabyte’s of data is being generated that can provide valuable big data insights into various aspects. For instance, weather patterns and other natural process can be tracked and monitored using a Hadoop system.Healthcare industry is using Hadoop applications to record and monitor health indicators and patient vitals by analysing the data generated from IoT sensors.

Hadoop is a powerful open source framework being utilized by several organizations for analysing and processing data gathered by the Internet of Things (IoT). Hadoop can store close to 1 trillion files using enterprise class storage processing layer. Various correlations can be made between distinct types of unstructured data by using Hadoop and IoT, thereby providing enterprise a level of competitive advantage in the industry. Large enterprises like Amazon, Walmart, and Macy’sare leveraging IoT data using Hadoop and streaming analytics to find actionable big data insights from various IoT data sources.

The below image illustrates how the interaction happens between the Internet of Things (IoT), Data Stores and the Big Data Analytics Engine. 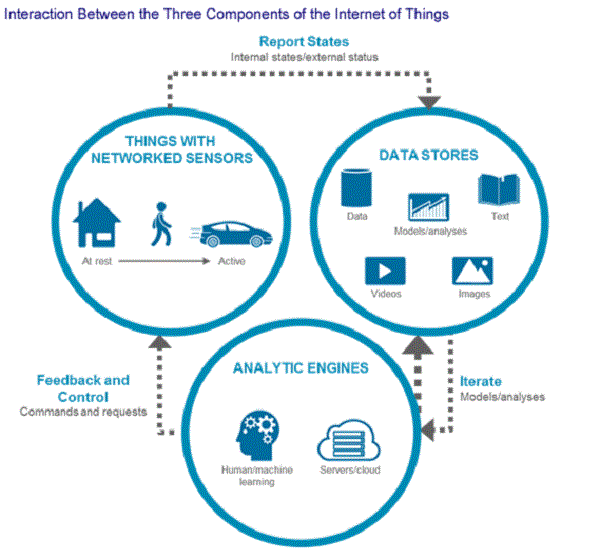 1) The popular MagicBand of Disney World’s proprietary is one of the best examples of how IoT leverages big data. MagicBand is a wearable that tourists can wear on their wrist to do everything starting from check-in into their room, buying their meal, crossing the turnstiles at the theme park and reserving space at a popular Disney attraction. Disney collects unstructured data about the movements of the tourists to the theme park to leverage it for analytics which helps them- staff attractions and rides effectively, regulate the inventory during rush-hours at restaurants, accommodate more guests into the hotel rooms.

2) The popular jewellery store Alex and Ani are using a beacon technology in their store to keep a track of the number of visitors inside their store and send customized discount coupons and offers to their customers as soon as they enter the store.

3) Popular food chain McDonalds is using beacon technology to provide coupons to the customers through their mobile app who are in close proximity of the nearby McDonald restaurant. The customers have a privilege personalize the kind of messages they receive and find out the deals that are most relevant to them using the mobile app.

4) UPS, the largest shipping company in US is leveraging big data analytics using sensor data to enhance the efficiency, decrease the environmental impact and save money. UPS installed sensors on its delivery vehicle to track the number of miles per gallon, mileage, engine health number of stops and speed. These IoT sensors collect close to 200 data points for every vehicle in a fleet and there are close to 80,000 every day. UPS has been successful in decreasing the harmful emissions fuel consumption and reducing the idle time of the vehicles.

"Every enterprise needs to factor in how the Internet of Things is going to affect them and their business, and must respond by establishing the right infrastructure to support this level of Big Data and analytics. If they don’t, they will fall behind."- said Andreas Mai, Director at Cisco Systems.