Python for Data Science vs Python for Web Development

Python for Data Science vs Python for Web Development 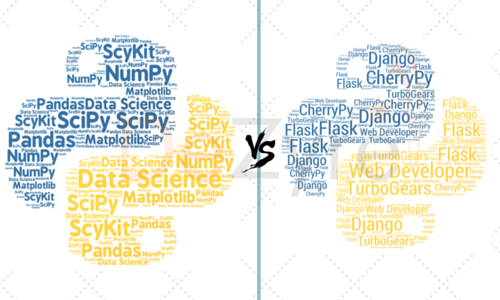 Organizations of all sizes and industries – from the top financial institutions to the smallest big data start-ups are using Python programming language to run their business.

“There are only two kinds of languages: the ones people complain about and the ones nobody uses.” – Bjarne Stroustrup.

Python language comes in the former category and is finding increased adoption in numerical computations, machine learning and several data science applications. Python language can do anything, excluding performance dependent and low level stuff. The best bet to use Python programming language is for data analysis and statistical computations. Learning Python programming for web development requires programmers to master various web frameworks like Django that can help the build websites whereas learning Python for data science requires data scientists to learn the usage of regular expressions, get working with the scientific libraries and master the data visualization concepts. With completely different purposes, programmers or professionals who are not knowledgeable about web programming concepts with Python language can easily go ahead and pursue data science in Python programming language without any difficulty.

Python is a 23-year-old powerful expressive dynamic programming language where a programmer can write the code once and execute it without using a separate compiler for the purpose. Python in web development supports various programming paradigms such as structured programming, functional programming and object oriented programming. Python language code can be easily embedded into various existing web application that require a programming interface. However, Python language is a preeminent choice for academic, research and scientific applications which need faster execution and precise mathematical calculations.

Python web programming requires programmers to learn about the various python web development frameworks, which can be intimidating because the documentation available for the python web development frameworks might be somewhat difficult to understand. However, it is undeniable that to develop a dynamic website or a web application using Python language, learning a web framework is essential.

There are several Python web application frameworks available for free like-

It is a simple and lightweight solution for beginners who want to get started with developing single-page web applications. This framework does not support for validation, data abstraction layer and many other components that various other frameworks include. It is not a full stack framework and is used only in the development of small websites.

It emphasizes on Pythonic conventions so that programmers can build web applications just the way they would do it using object oriented Python programming. CherryPy is the base template for other popular full stack frameworks like TurboBears and Web2py.

There are so many other web frameworks like Pyramid, Bottle, and Pylons etc. but regardless of the fact, whichever web framework a python programmer uses, the challenge is that he/she needs to pay close attention to detailing on the tutorials and documentation.

Why Web Development with Python is an impractical choice?

Why Python for Data Science is the best fit?

Python programming is the core technology that powers big data, finance, statistics and number crunching with English like syntax. The recent growth of the rich Python data science ecosystem with multiple packages for Machine learning, natural language processing, data visualization, data exploration, data analysis and data mining is resulting in Pythonification of the data science community. Today, Python data science language has all the nuts and bolts for cleaning, transforming, processing and crunching big data. Python is the most in-demand skill for data scientist job role. A data scientist with python programming skills in New York earns an average salary of $140,000

Data Scientists like to work in a programming environment that can quickly prototype by helping them jot down their ideas and models easily. They like to get their stuff done by analysing huge datasets to draw conclusions. Python programming is the most versatile and capable all-rounder for data science applications as it helps data scientists do all this productively by taking optimal minimal time for coding, debugging, executing and getting the results.

The real value of a great enterprise data scientist is to use various data visualizations that can help communicate the data patterns and predictions to various stakeholders of the business effectively, otherwise it is just a zero-sum game. Python has almost every aspect of scientific computing with high computational intensity which makes it a supreme choice for programming across different data science applications, as programmers can do all the development and analysis in one language. Python for data science links between various units of a business and provides a direct medium for data sharing and processing language. 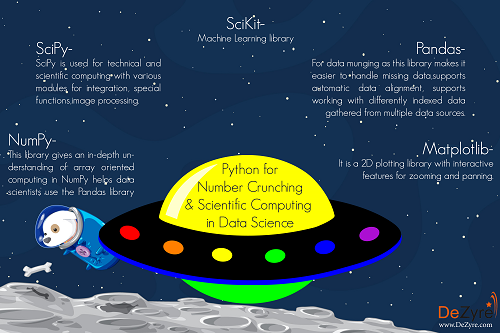 It is the foundation base for the higher level tools built in Python programming language. This library cannot be used for high level data analysis but in-depth understanding of array oriented computing in NumPy helps data scientists use the Pandas library effectively.

This is a popular machine learning library with various regression, classification and clustering algorithms with support for gradient boosting, vector machines, naïve Bayes, and logistic regression. This library is designed to interoperate with NumPy and SciPy.

It is a 2D plotting library with interactive features for zooming and panning for publication quality figures in different hard copy formats and in interactive environments across various platforms.

Matplotlib, NumPy and SciPy are the base for scientific computing. There are many other Python libraries such as Pattern for web mining, NLTK for natural language processing, Theano for deep learning, Scrappy for web scraping, IPython, Statsmodels, Mlpy and more. For people starting with data science in Python, they need to be well-versed with the above mentioned top data analysis libraries in Python.

If you are a data scientist who uses Python language, we would love to voice your opinion in the comments! On which points above do you agree or disagree? What are some important considerations that we have left out for doing data science in Python?