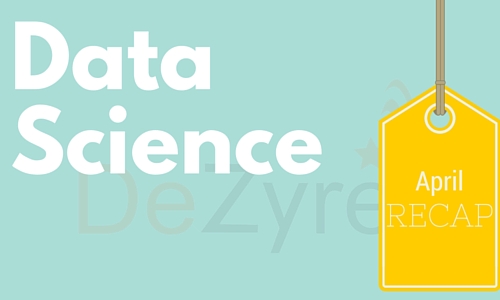 Data Science is slowly taking over the crucial aspects of our lives. Sports in no different. Recently a Pirates prospect, Matt Benedict, tossed a baseball around Pittsburg minor league complex. As he threw the ball, 5 sensors attached to the ball measured, the speed, swing of the arm, wind factor and the spin on the ball to determine how the throw could have been better. Biometrics ball had provided the data necessary to gather the data to make this decision on player improvement.

Data Science can now match you to your perfect job, but it cannot create diverse workplaces. April 7, 2016. ZDNet.com

Elevated Careers, eHarmony’s latest venture is set to prove that the same matching algorithms that had made eHarmony a success will work for matching people to their compatible jobs. Dr. Steve Carter says that the algorithms that matches someone to their perfect date can also predict relationship with work and find out which jobs you are most comfortable with. The challenge for Elevated Careers would be diversifying a workplace, as dividing people based on their gender and ethnicity, while perfectly viable in case of relationships is illegal when it comes to workplaces.

Microsoft unveiled a virtual machine packed with popular data science programming tools on Linux and Windows. Apart from the standard OS utilities the VM comes with few pre-installed tools like Jupyter Notebook with Python and R kernel for browser based data exploration, Microsoft R , Anaconda Python distribution and other machine learning tools. The user has complete administrative access to the VM and can install any additional software required as per the business requirements.

Weed out the real Data Scientists from the chaff in the market. April 1, 2016. ComputerWorld.com

With the hype the data science job market has generated, anyone, with a slight involvement in data analytics is calling himself a Data Scientist. How then would an employer know if the person they are hiring, has all the skills required? Well the recruiting company Correlation One, specializes in data science jobs. Correlation One has designed a series of tests which can correctly generate a report on the skills of a “data scientist”.

The Oil & Energy sector is one of the most unstable and sector in the world. The fluctuating nature of oil prices across the world – makes having quality information so much more crucial. The Energy Industry is using Data Science to cut costs, reduce risks and optimize investments as much as possible.

Inspiring women to take up careers in Data Science and Big Data, these 12 women have come a long way. It has long since been observed that women do not do well statistically when it comes to choosing a career in the STEM fields. But a recent Women in Data Science Conference, held in November 2015, saw an unprecedented interest. These 12 women in the field of Data Science are encouraging more and more women to choose this career.

Winton, the global investment management and technology firm that develops intelligent investment systems has announced the opening of a data science centre in San Francisco. The data science team at San Francisco will be engaged in expanding Winton’s proprietary data sets and discovering novel applications in statistical inference and pattern recognition.