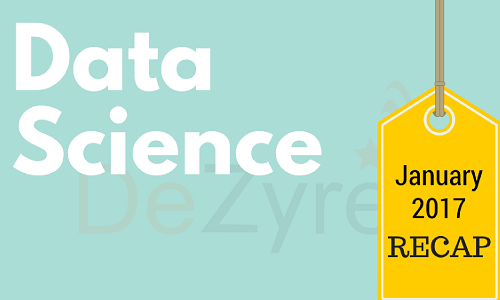 iCrunchdata recently released its United States Data Science Jobs report and the numbers are fascinating.  According to the report-
i) 27% of data scientists in US earn salaries in the range $76,000 to $100,000 USD. Of all the data scientists hired in US.
ii) 93% of them are full time hires whilst only 7% of them are part time or contract to hire positions.
iii) San Francisco, California topped the list of Top 10 Cities for Data Science Jobs
iv) Trending skills for data scientists are Python programming, R programming, Hadoop, SAS, Julia, Data Visualization, Data Integration,Machine Learning , SQL.

With Colorado’s traffic congestion problem getting worse over the time, building new roads worth billion dollars is not the solution.Colorado Department of Transportation has teamed up with Denver based Galvanize wherein CDOT employees will gain data science skills from Galvanize professors and students. The state transportation data would be analysed to figure out easier methods to curb Colorado traffic congestion problem without imposing extra cost on taxpayers.

Want to be a software developer? Time to learn AI and data science. InfoWorld.com, January 23,2017.

Virtualitics LLC is all set to launch its business that will bring together virtual reality and data visualization. The technology makes use of machine learning to summarize data patterns. Data scientists at Virtualitics have teamed up with video-gaming veterans to develop user friendly tools in virtual reality. This will help people to draw insights beyond the 2D screen so that businesses can get a better picture on what going on with the data.

IT is a resource crunched field in many organizations and dedicating physical servers and having support for a laboratory with specific ROI might be challenging for data scientists. To fulfill that backdrop, cloud is just the perfect place for data science experimentation. Having a data lab in the cloud will allow data scientists to work with huge amounts of data and integrate well with existing technologies that can perform complex machine learning tasks. A cloud data lab can be easily repurporsed or stopped if not required and can as well be designed for production workloads.TO keep data scientists happy, organizations have started implementing cloud data lab so that data scientists can replicate and scale the entire technogloy stack just by mere click of a button.

Data Scientist wins the title of “Best Job in America” for  second year in a row followed by DevOps and Data Engineer.Glassdoor ranks the jobs based on the job satisfaction rating, annual base salary and the number of job openings. Data Scientist job stands out across all the 3 categories with  a healthy job satisfaction rating of 4.4, annual base salary of $110,000 and 4000 job openings in US alone. Data engineers,professionals skilled in preparing data for analytics score the third place with approximately 2600 open job positions in US with an average salary of $106,000.

In this deep learning project, we will predict customer churn using Artificial Neural Networks and learn how to model an ANN in R with the keras deep learning package.
View Project Details