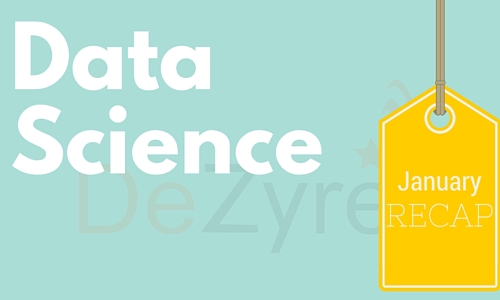 Machine Learning is gaining mainstream presence due to the big data explosion and its varied frameworks and analysis tools. In the coming year machine learning is expected to change in the following ways – techies will continue to remake themselves with machine learning as they did with cloud computing, apache spark will gain momentum, machine learning itself will be open source and the struggle for data sources to feed machine learning will get more heated.

Data Science is all set to make new health discoveries in Europe and Ireland. January 8, 2016. CORDIS

Every company’s data science needs will vary. This is why it is so important to build the right kind of data science teams in order to create profitable big data projects. Miles Johnson and Sam Hochgraf of IBB Consulting Group, list out a detailed step by step process on how to hire the best Data Science team in any company.

DHL – one of the largest logistics company just unraveled it research on how supply chain management data can augment productivity. The supply chain data is mainly untapped, but it is has a treasure of information which can improve the business processes if correctly analysed with the help of data science.

How to reduce the shortage of talented Data Scientists? Techcrunch.com, December 31, 2015.

Where a decade ago it would have been really difficult explaining the role of a Data Scientist to someone, now, it is difficult to stop companies from hiring data scientists. It all made quite a shift in the last 5 years when big data analytics took over the market. There is an anemic growth in supply and a global shortage of talented Data Scientists. The global talent dearth is mainly because Universities do not yet provide Data Science as an elective.

Oracle has announced its Big Data predictions for 2016. ITNewsOnline.com January2, 2016.

The tech giant Oracle is expecting Big Data deployments to become more mainstream in 2016. This has led them to make a series of prediction for the coming year, some of them being – the demand for data scientists is going to increase, data virtualization will become a reality, data civilians will start to behave more and more like data scientists, big data cloud services will help with IoT.

Data Scientists are in short supply, while the demand for them is constantly growing. January 7, 2016. FolioMag.com

Booz Allen Hamilton’s new platform called Sailfish aims to help companies who are not yet able to hire qualified data scientists. Sailfish is designed to make data analytics easier for users. Within Sailfish there is a Sailfish Exchange – which has a highly usable data library, where users can upload and share key data points.

In order to widen the scale, impact and scope of computer science research into Data Science, the University of Chicago has brought in Data Science specialist and scholar Michael Franklin to serve as a senior advisor in the Computer Science department.

Australian based software and artificial intelligence company – Complexica had reaffirmed the beliefs that data science can help in the growth of a company. It has recently hired Nigel Hey, data chief for Treasury Wine Estates to lead its data science team.

The past semester at MIT’s Sloan School of Management, Analytics Labs (A-Lab), saw a host of companies submitting projects – their business problems to be solved through data analysis. The objective of this course and experiment at A-Lab, was to find out if Data Science can be used to solve real life business problems. Data Science is still a maturing discipline and solving business problems requires quite a bit of domain expertise. It will be interesting to see how data science develops in today’s market.

Learn Data Science in R Programming to bridge the shortage of analytic skills!