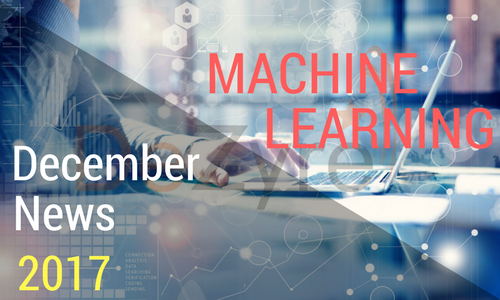 A new research found that UK was expected to face the largest increase in bankruptcies among any of the EU economies in 2017. A team of researchers at Genpact collected 11 years of financial data on 267 bankrupt companies and 585 healthy companies across IT and healthcare sectors to prove if machine learning could predict bankruptcy in advance of it being occured. The team successfully proved that using machine learning they could predict bankruptcies 2 years in advance , something that would never have been possible by manually reviewing the data and using traditional statistical methods.

If you would like more info about DeZyre's Certified Machine Learning Course, click on the request info. button on top of this page.

Training any machine learning model on terabyte scale dataset is a difficult problem. Even if there is a server with enough memory to fit all the data training the model still requires lot of time.  Special hardware devices like GPU’s have garnered significance for handling compute intensive workloads  but it is yet difficult to manage highly data-intensive workloads with these GPU’s. IBM research team has developed a scheme for training big data sets with speed. A single GPU could process 30GB of training dataset in less than a minute (10x faster than the existing methods for limited memory training.

IBM’s Cyber Security Intelligence Index estimates that 95% of all security incidents are because of human errors, whether it is because of clicking on malicious links, having their systems stolen or misconfiguration of the servers by network admins.IBM scientists are discovering novel methods with the use of big data and machine learning to better understand humans and predict errors or suspicious/ abnormal user behaviors to provide better protection against security risks. The new technology leveraging the power of machine learning will let security teams better understand their employees and identify any suspicious or abnormal behaviour. The goal is to build risk based authentication systems to provide staff access to data or systems based on a risk score of their previous behaviour patterns and comparing it with the systems they are requesting access to.

Michigan State University developed an automated machine learning system named ATM (Auto Tune Models) that uses cloud based on-demand computing speed up data analysis. When solving a given data problem, data scientists have to scan through the datasets and select a modelling technique which they think would work best for the given problem. The difficulty here is that there are hundreds of modelling techniques that one can choose from and choose the best modelling technique actually makes a difference between making millions of dollars in ad revenue or zero, or finding a flaw in a medical device or not. ATM can select modelling techniques better than humans this has been tested for 30% of the datasets.ATM worked better than humans could , on average it took open-machine learning users an average of 200 days to build a solution whereas ATM could do it in less than a day y creating a better performing model than humans.

Machine learning will be the most exciting tech trend of 2018: Persistent Systems CTO.MoneyControl.com, December 20, 2017.

Dr Siddhartha Chatterjee, CTO of Persistent Systems  said in an interview with Moneycontrol that Machine Learning will be the most exciting, dominant and pervasive  technology trend in 2018 for both consumers and enterprises. Millennials play an important role in the increased usage of chatbots, with 60% of them saying that they have used chatbots at least once. Chatbots are being adopted rapidly in customer facing industries like retail,banking , and telecom. India will be a broad contributor in machine learning with specialised AI and Machine Learning labs being setup in bigger corporate environments that are rolling machine learning platforms such as Ignio from TCS and Nia from Infosys.Overall, the future of machine learning technology in India is very vibrant and contributing in diverse ways for mainstream adoption.

Machine learning will not replace people in all jobs: Study. Economictimes.com, December 26, 2017.

LinkedIn: Machine learning jobs are on the rise. SDTimes.com, December 27, 2017.

According to a recently released report by LinkedIn, data scientists, machine learning engineers and big data engineers are the top emerging tech jobs. These growing tech jobs are mostly in urban areas that include New York, Los Angeles,  and San Francisco. There is also an increase in freelancers with major hiring in Oregon, California and New York. The LinkedIn report also finds that there is a decline in specialized roles as organizations are looking to hire machine learning engineers and data scientists with a more comprehensive skill set .