Scala vs. Python for Apache Spark

Scala vs. Python for Apache Spark

As the big data experts continue to realize the benefits of Scala for Spark and Python for Spark over the standard JVMs - there has been a lot of debate lately on “Scala vs. Python- Which is a better programming language for Apache Spark?”. The criticism from data scientists on choosing either Scala Spark or Python Spark emphasizes on - performance, complexity of the language, integration using existing libraries and the best utilization of Apache Spark’s core capabilities.

Scala vs Python- Which one to choose for Spark Programming? 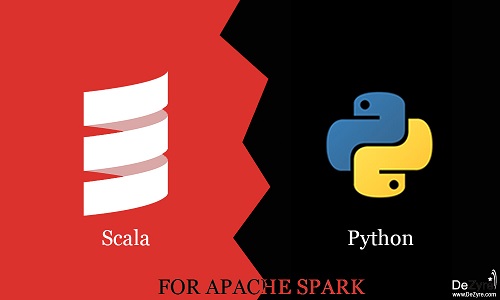 Hadoop’s faster cousin, Apache Spark framework, has APIs for data processing and analysis in various languages: Java, Scala and Python. For the purpose of this discussion, we will eliminate Java from the list of comparison for big data analysis and processing, as it is too verbose. Java does not support Read-Evaluate-Print-Loop (REPL) which is a major deal breaker when choosing a programming language for big data processing.

Scala and Python are both easy to program and help data experts get productive fast. Data scientists often prefer to learn both Scala for Spark and Python for Spark but Python is usually the second favourite language for Apache Spark, as Scala was there first. However, here are some important factors that can help data scientists or data engineers choose the best programming language based on their requirements: 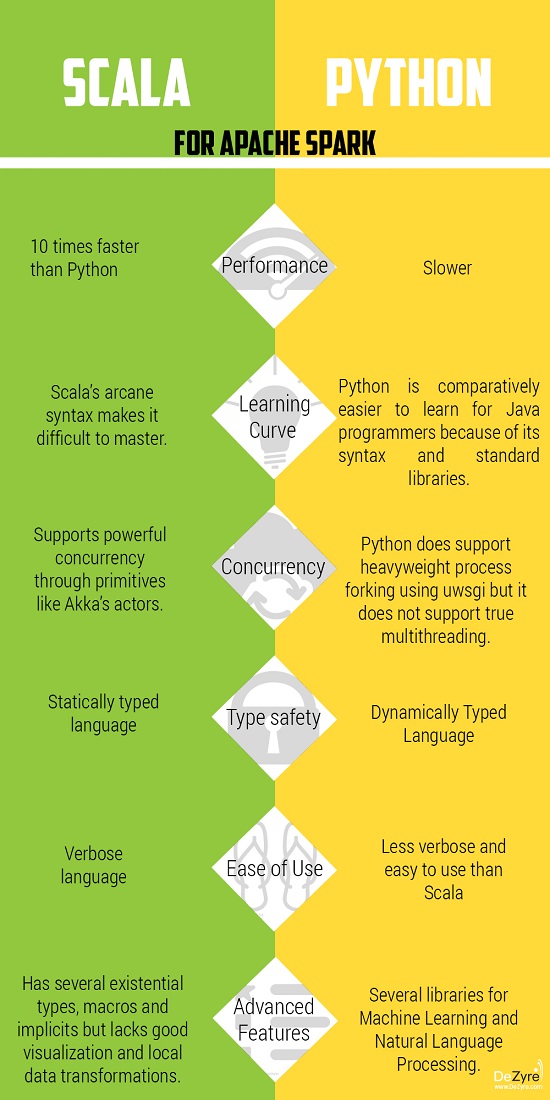 Scala programming language is 10 times faster than Python for data analysis and processing due to JVM. The performance is mediocre when Python programming code is used to make calls to Spark libraries but if there is lot of processing involved than Python code becomes much slower than the Scala equivalent code. Python interpreter PyPy has an in-built JIT (Just-In-Time) compiler which is very fast but it does not provide support for various Python C extensions. In such situations, the CPython interpreter with C extensions for libraries outperforms PyPy interpreter.

Using Python against Apache Spark comes as a performance overhead over Scala but the significance depends on what you are doing. Scala is faster than Python when there are less number of cores. As the number of cores increases, the performance advantage of Scala starts to dwindle.

When working with lot of cores, performance is not a major driving factor in choosing the programming language for Apache Spark. However, when there is significant processing logic, performance is a major factor and Scala definitely offers better performance than Python, for programming against Spark.

Scala language has several syntactic sugars when programming with Apache Spark, so big data professionals need to be extremely cautious when learning Scala for Spark. Programmers might find the syntax of Scala for programming in Spark crazy hard at times. Few libraries in Scala makes it difficult to define random symbolic operators that can be understood by inexperienced programmers. While using Scala, developers need to focus on the readability of the code. Scala is a sophisticated language with flexible syntax when compared to Java or Python. There is an increasing demand for Scala developers because big data companies value developers who can master a productive and robust programming language for data analysis and processing in Apache Spark.

Python is comparatively easier to learn for Java programmers because of its syntax and standard libraries. However, Python is not an ideal choice for highly concurrent and scalable systems like SoundCloud or Twitter.

The complex and diverse infrastructure of big data systems demands a programming language, that has the power to integrate across several databases and services. Scala wins the game here with the Play framework offering many asynchronous libraries and reactive cores that integrate easily with various concurrency primitives like Akka’s actors in the big data ecosystem. Scala allows developers to write efficient, readable and maintainable services without dangling the program code into an unreadable cobweb of call-backs. Python, to the contrary, does support heavyweight process forking using uwsgi but it does not support true multithreading.

When using Python for Spark, irrespective of the number of threads the process has –only one CPU is active at a time for a Python process. This helps get around with one process per CPU core but the downfall to this is, that whenever a new code is to be deployed, more processes need to restart and it also requires additional memory overhead. Scala is more efficient and easy to work with in these aspects.

Refactoring the program code of a statically typed language like Scala is much easier and hassle-free than refactoring the code of dynamic language like Python. Developers often face difficulties after modifying Python program code as it creates more bugs than fixing the older ones. Typecheck in Python actually conquests the duck-typing philosophy of python. It is better to be slow and safe using Scala for Spark than being fast and dead using Python for Spark.

Python is an effective choice against Spark for smaller ad hoc experiments but it does not scale efficiently like the statically type language – Scala, for large software engineering efforts in production.

Scala and Python languages are equally expressive in the context of Spark so by using Scala or Python the desired functionality can be achieved. Either way the programmer creates a Spark content and calls functions on that. Python is a more user friendly language than Scala. Python is less verbose making it easy for developers to write a script in Python for Spark. Ease of use is a subjective factor because it comes down to the personal preference of the programmer.

Scala programming language has several existential types, macros and implicits. The arcane syntax of Scala might make it difficult to experiment with the advanced features which might be incomprehensible to the developers. However, the advantage of Scala comes with using these powerful features in important frameworks and libraries.

Having said that, Scala does not have sufficient data science tools and libraries like Python for machine learning and natural language processing. SparkMLib –the machine learning library has only fewer ML algorithms but they are ideal for big data processing. Scala lacks good visualization and local data transformations. Scala is definitely the best pick for Spark Streaming feature because Python Spark streaming support is not advanced and mature like Scala.

“Scala is faster and moderately easy to use, while Python is slower but very easy to use.”

Apache Spark framework is written in Scala, so knowing Scala programming language helps big data developers dig into the source code with ease, if something does not function as expected. Using Python increases the probability for more issues and bugs because translation between 2 different languages is difficult. Using Scala for Spark provides access to the latest features of the Spark framework as they are first available in Scala and then ported to Python.

Deciding on Scala vs Python for Spark depends on the features that best fit the project needs as each one has its own pros and cons. Before choosing a language for programming with Apache Spark it is necessary that developers learn Scala and Python to familiarize with their features. Having learnt both Python and Scala, it should be pretty easy to make a decision on when to use Scala for Spark and when to use Python for Spark. Language choice for programming in Apache Spark purely depends on the problem to solve.

We would love to know your opinion on which language would you choose for programming in Apache Spark. Please do mention your choice in the comments below.

In this hadoop project, we are going to be continuing the series on data engineering by discussing and implementing various ways to solve the hadoop small file problem.
View Project Details
-->