Use the Adult Income dataset to predict whether income exceeds 50K yr based on census data. 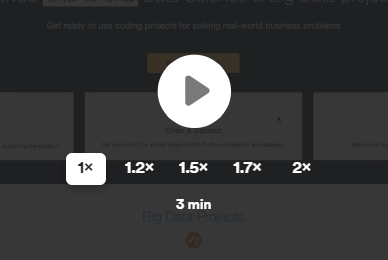 Each project comes with 2-5 hours of micro-videos explaining the solution.

Get access to 50+ solved projects with iPython notebooks and datasets.

This is one of the best of investments you can make with regards to career progression and growth in technological knowledge. I was pointed in this direction by a mentor in the IT world who I highly... Read More

I came to the platform with no experience and now I am knowledgeable in Machine Learning with Python. No easy thing I must say, the sessions are challenging and go to the depths. I looked at graduate... Read More

What will you learn

Understanding the problem statement
Importing the dataset and importing libraries
Performing basic EDA
Data cleaning Imputing the null values and if required filling them using appropriate methods
Checking data distribution using statistical techniques
Checking for outliers and how they need to be treated as per the model selection
Using python libraries such as matplotlib and seaborn for better and advanced visualizations
Splitting Dataset into Train and Test using Stratified Sampling
Feature Engineering for better decision making by a model
Training a model using Vanilla DNN
As per the result, research for other network architectures
Understanding Class Imbalance Problem and whether any solution needed to tackle it
Doing Cross Validation to see if the model is overfitting and whether results are somewhat constant
Tuning hyperparameters of models to achieve optimal performance and their effect in the results
Making predictions using the trained model
Gaining confidence in the model using metrics such as Accuracy,Precision,Recall,F1-Score,AUC
Understanding why Accuracy might be/might not be a good metric to check results
Selection of the best model based on Feature Importance and the metrics

A census as the total process of collecting, compiling, and publishing demographic, economic, and social data pertaining to a specific time to all persons in a country or delimited part of a country. As part of a census count, most countries also include a census of housing. It is the process of collecting, compiling and publishing information on buildings, living quarters and building-related facilities such as sewage systems, bathrooms, and electricity, to name a few.

In this project, we will use a standard imbalanced machine learning dataset referred to as the “Adult Income” or simply the “adult” dataset.

The dataset is credited to Ronny Kohavi and Barry Becker and was drawn from the 1994 United States Census Bureau data and involves using personal details such as education level to predict whether an individual will earn more or less than $50,000 per year.

The dataset provides 14 input variables that are a mixture of categorical, ordinal, and numerical data types. The complete list of variables is as follows:

The dataset contains missing values that are marked with a question mark character (?).

There are two class values ‘>50K‘ and ‘<=50K‘, meaning it is a binary classification task. The classes are imbalanced, with a skew toward the ‘<=50K‘ class label.

Census Salary Prediction where we have to classify between >50K <=50K.

How Does it help

Music Recommendation Project using Machine Learning - Use the KKBox dataset to predict the chances of a user listening to a song again after their very first noticeable listening event.

Curriculum For This Mini Project