10 reasons why you should use NodeJs

10 reasons why you should use NodeJs


Every novel technology gains momentum and attracts attention in the beginning as startups are open to experimenting with new technologies at any given time, however we can see that big established organizations are shifting to Node.js from years of legacy systems. Developers know that a new “game-changing” technology paves way into the IT market every few months just to pass into extinction later but that is not the case with Node.js. This is rather unusual and to get a better understanding let’s deep dive into how Node.js works and why enterprises should adopt to this novel technology.

“Why go to Facebook and do PHP when you can go to PayPal and do Node.js”- said a new hire who had the option to work for Facebook or PayPal with similar benefits and offers. Node.js is the key to developer happiness and wide enterprise adoption.

After over 20 years of stateless-web based on the stateless request-response paradigm, we finally have web applications with real-time, two-way connections. - Ryan Dahl, the creator of Node.js

Node.js is no longer a technology that web developers are hacking in their cubicle basement but enterprises like PayPal, Yahoo, eBay,  Netflix, The Mail Online, and Walmart are betting big on Node.js. The IoT community is also embracing the power of Node.js for embedded devices and robotics like Cylon and Nodebots.

Professionals might debate that two-way connection and communication has been there since quite a while in the form of Java Applets or Flash but the fact is that they were merely sandboxed environments employing web transport protocol to be distributed at the client end. Also they were operated over non-standard ports and run is isolation requiring additional permissions. Node.js is a promising technology plays a vital role in the technology mound of many large enterprises that run heavy load web applications.

“Node.js powers our web applications and has allowed our teams to move much faster in bringing their designs to life”- said Jeff Harrell, Director of Engineering at PayPal

“Node.js is the execution core of Manhattan. Allowing developers to build one code base using one language – that is the nirvana for developers.“-said Renaud Waldura, Sr. Product Manager, Cocktail

“On the server side, our entire mobile software stack is completely built in Node. One reason was scale. The second is Node showed us huge performance gains.” –said Kiran Prasad, Mobile Web Development Lead at LinkedIn

According to the above statements made by professionals hailing from reputed organizations, performance, scalability and short web development cycles are probably some of the reasons for extensive adoption of Node.js in enterprise environments for web development.

10 Reasons why use Node.js 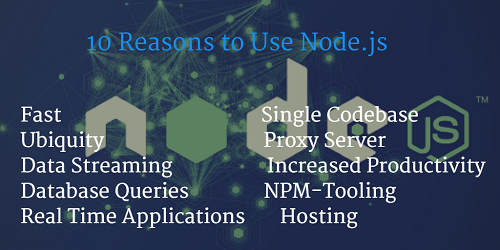 Enterprises admire the speed of Node.js. Node.js uses the V8 engine developed by Google which compiles JavaScript into native machine code and runs at lightning speed. Node.js does not jumble up with creating separate threads involving locking headache but it rather has single thread i.e. the event loop which is responsible for all the asynchronous I/O operations. 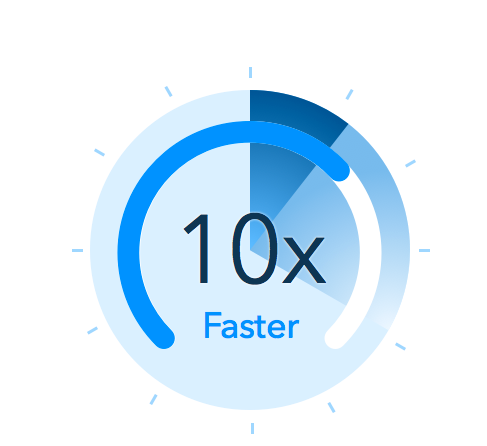 In legacy web platforms, HTTP request and response are considered as isolated events, in reality they are actually data streams. This feature can be leveraged to complete advantage with Node.js to develop some great features like- processing files while the upload is in progress(helps in reducing the overall processing time) because data comes in the form of streams. This can also be implemented for real-time video or audio encoding.

The database queries for new NoSQL databases like MongoDB, CouchDB are written in JavaScript. Developers need no gear-shifting in remembering the syntax differences when combining Node.js and NoSQL databases. Node.js shines with real time web apps as the JSON stored data format allows it to function without any hindrances in data conversion and mismatches unlike Ruby on Rails which requires conversion from JSON to binary models.

5) Real Time web applications are a walk in the park with Node.js

Developers need not worry about low-level sockets and protocols as Node.js helps them build comet-driven real time web applications in the same time as they would take to bake a birthday cake with ready-made mix or create a simple blog in PHP. Node.js excels at multi-user real time web apps like games and chat applications. The multi-user requirement is taken care of the event loop through web socket protocol which runs on TCP, avoiding the overhead of HTTP for web development.

Web engineering companyToptalstates, “Node.js is not a silver-bullet new platform that will dominate the web development world. Instead, it’s a platform that fills a particular need. Where Node really shines is in building fast, scalable network applications.”

7) Node.js comes to the rescue as Proxy Server

Node.js can be used to proxy different services with varying response times or for gathering data from various sources. For instance, if there is a server side application that communicates with third party resources, stores videos or images, or collects data from different sources then Node.js can be used as a Proxy if the enterprise does not have an existent infrastructure for proxy or requires local development for this solution.

All the Node.js programs are developed using JavaScript which implies that the silos that once existed between the frontend and backend developers are completely broken down which has enhanced the efficiency of the web development process at various organizations. Enterprises can merge the frontend and backend teams into a single unit for efficient operation by getting away with the inter-silo dependencies.

PayPal has measures increase in developer productivity by using Node.js. It took half the number of people to deliver an applications and it was delivered in less time with double productivity from developers.

Node.js package manager abbreviated as NPM resembles package managers from other ecosystems but NPM is robust, consistent and super-fast that helps get dependency management right. There are more than 60000 modules available for the users which are increasing at a rapid pace. With increasing interest in Node.js, the node community is growing stronger than ever.Top of Form

With increased adoption of Node.js, hosting is also flourishing. PaaS (Platform as a Service) service providers such as Heroku and Modulus are now formally supporting node deployments to a single command.

To sum it up, an organization that uses Node.js can-

With so many business benefits, there could hardly be any enterprises that would be inconsiderate about not considering Node.js in a serious way.