The smartphone boom around the world (and exponential rise in data consumption accompanying it) has created an entirely new ecosystem to attract consumers – the mobile application. Smartphone era has shattered the boundary between internet accessibility via personal computer and mobile phones. During the 2007 – 2009 era, when the iPhone was charming mobile consumers around the world and Android was still finding its feet, critics considered it to be short lived and said applications were no substitute for websites.

Fast forward to 2015, when a number of e-businesses around the world declared that they received more traffic from a mobile application compared to website. In a definite tectonic shift in mobile and e-commerce domains, mobile applications are considered more as a necessity than a luxury.

Amazon, Facebook, Gmail, WhatsApp, Instagram are some of the world’s most popular websites – catering to different set of consumers. However, all of them have one thing in common – they all realized the shifting internet usage pattern among their consumers and adapted in time to give their consumers another channel to connect – the mobile application. 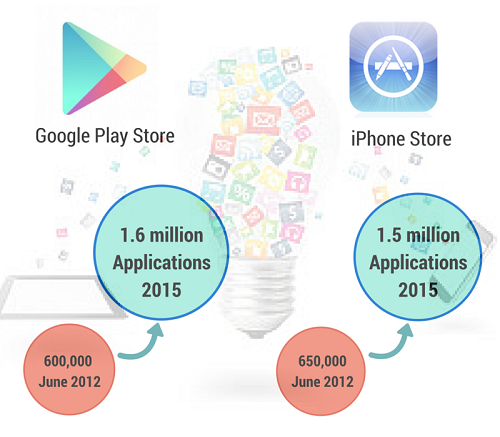 The popularity of mobile applications made way for an entire industry – mobile app development. Given the collaborative power of the internet, businesses around the world have been able to tap into the creative powers of app developers from around the world and give their customers a one – touch interface to connect. In this post we scout for the world’s best mobile application development companies and catch a glimpse of their client base and what makes them click.

Sourcebits is a San Francisco, CA based company with offices in India, Greece and London. Other than mobile application design and development, it offers services in strategy, marketing and analytics. Founded in 2006 by Rohit Singal, it has earned an enviable reputation when it comes to designing and developing mobile applications, games, software and web services. The company has been on the ascent ever since it was founded – as acknowledged by Gartner, which named it “Cool Vendor in Services” in 2014. The company’s portfolio has grown to over 550 solutions for mobile, web and cloud based platforms and its diversified client list includes GE, SAP, Intel, MIT, Procter & Gamble, Hershey’s, Coca Cola and a host of emerging technology companies such as Mobeam, Knocking, Peel and Sling Media. One of the most stand-out projects for Sourcebits has been a concept redesign of Google Glass, a dating app Twine and a highly popular game Apocalypse Max.

Founded in the year 2008, Contus is a privately held company with offices in California, USA and Chennai, India. In a reasonably short period since its inception, Contus caters to customers in over 40 countries and its 70+ products are being used by over 20 million users around the world. It impressive list of over 1000 clients has the likes of Mahindra, Dr. Reddy’s, Accenture, The World Bank and many others. Using the first mover’s advantage to its maximum, Contus was ready to embrace the emergence of SMAC (Social, Mobile, Analytics and Cloud) and the rewards have been just.

WillowTree Apps is another technology company in New York, which has scaled one peak after the other since 2007, its foundation year. It has launched over 300 applications in this relatively short time and continues to launch 4 to 6 application month. It is a one stop shop for Mobile Strategy, App Development, User Experience (UX) Design, Enterprise App Development, Cloud & API Integration, Emerging Platforms and anything else related to web or mobile application development. Its impressive list of clients includes Fox News, GE, Johnson & Johnson, Harvard Business Publishing, Barclays Center, Quintiles and many other leaders spread across various industry domains.

Mobile app development is still a fast growing but young tech space. Talking about a young company, you would not want to miss having a look at PhD Labs. A glance at their page is enough to catch your attention – given the unconventional way in which the company introduces its team. Unlike most mobile app development companies founded within the past decade, its foundation can be traced back to the year 1998. Ever since taking a head first dive into app development in the year 2011, they have serviced a celebrated list of clients such as Henkel, Quicksilver, Bank of America and PGA – and an impressive, awards laden trophy cabinet.

If you like fairytales, you need not look beyond Appster. Founded in the year 2011 in Australia, it has rapidly expanded to San Fracisco, U.S. and Gurgaon, India and its revenues touched AUD 10 million mark in 2014 – 3 years within its inception. Their app portfolio cuts across industry verticals such as travel, food, medical, gaming, technical and a lot more. What separates them from a number of other mobile app development companies is that they provide a lot of related services such as raising capital, formulating a product strategy for your business, design and development of apps across platforms and most importantly, post launch support.

Intellectsoft has been in business for 8 years and in this relatively short time; it has grown into a team size of 100+ and has delivered 300+ solutions for world renowned names. With operations in San Jose, London, Oslo and Minsk, Intellisoft is well placed to cater to a global client base and it has done redeemed its reach by providing software development services in 13 of the most contemporary technology domains. As is the case with most of the companies covered here, the client list has world renowned names such as Jaguar, Land Rover, Guinness, Nestle, Universal and Bombardier.

A company that has been ranked #46 in USA’s Most Promising Company on Forbes List, does not need much of an introduction. What sets it apart from other equally promising companies is demonstrated specialization in enterprise mobile applications across all major smartphone OS platforms, including  Apple iOS, Google’s Android, Microsoft Windows Mobile and Symbian. Headquartered in San Francisco, California, YMediaLabs also has offices in Indianapolis and New York City. Its impressive journey is testified by clients such as PayPal, EMC, Symantec, Safeway, Bud Light, BBC, American Express, Apple, L’Oreal and Western Union.

Mentormate started in 2001 with an app targeted at language educators. Since then, it has grown to over 270 employees spread over five cities around the world – providing mobile solutions by developing innovative, customized mobile and web software and services. It also provides ancillary services such as user experience (UX) design, backend integration and data analytics. It has worked with a diverse client base such as NASA, CAA Sports, Venture Solutions and Thomson Reuters on a number of successful projects related to analytics, design, integration and marketing.

AppBurst is a US military veteran founded company, established in 2009. It is committed to working with a US based software development team and provides customized services to wide range of industries. Headquartered in Florida, AppBurst provides native application development for all popular smartphone platforms – including iOS and Android. Whether you need an application for Business, Events, News or Games, it is likely that AppBurst will have a high quality solutions for you.