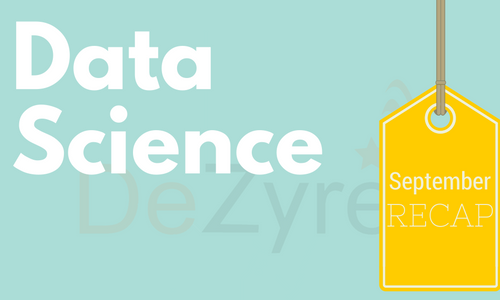 It is a known fact that Python programming language makes a programmer's job easier and not faster,however if the job includes doing data science then Intel is trying to make it faster as well for data scientists. The python distribution by Intel adds new high-speed math libraries developed by Intel to the already existing data science libraries in the Anaconda version.

With data scientists in short supply and the challenge to analyze high volumes of data rising in tandem,Bottlenose has launched its Nerve Center Platform that aims to automate data science tasks.The latest version of the Nerve Center Platform has added machine learning capabilites and is capable of discovering hidden patterns, anomalies and trends in streaming data.As some of the data science tasks are repeatable and computational, the new platform will free up 80% of data scientists time in concentrating on the hard stuff.

Data science automation specialist DataRobot launched a new DataRobot university course “Data Science for Executive”. The course is a half-day offering aimed to help executives who are interested in understanding the benefits of advanced data science and want to learn how to identify opportunities to optimize their business with the application of machine learning.

Researchers at National Cancer Institute are making cancer fighting discoveries by employing different data analysis techniques developed by NASA data scientists at NASA’s Jet Propulsion laboratory.Data scientists at NASA are figuring out novel ways to manage and mine the data extracted from sensors and other medical equipments that are attached to their comprehensive satellites, observatories, probes and arrays.

DataScience, Inc. announced the launch of DataScience Cloud platform that empowers data scientists to investigate different information sources, construct models and algorithms and deploy work without much of tech stack and engineering support. DataSciecen Cloud platform is a competitor to SAS for data science teams that look for a full-fledged platform to support their data science workflows.

Big Data and analytics has been used in many sectors and health industry is one of the important sector exploring big data use cases.The use of machine learning and information theoretics has helped in diagnoses of people with rare diseases resulting in appropriate medication in a timely manner. Considering an example of rare disease such as HAE (hereditary angioedema), the anonymized data was first collected and then it was analysed using big data techniques. It was further distilled using information theoretics to grab more relevant information. Machine learning was used to build the model where it could distinguish if the person had the disease or not. The results obtained were accurate. This use of technology can help palliate the pain humans are suffering.

Continuum Analytics,the creator of Anaconda, a topmost Open Data Science platform powered by Python has announced its collaboration with IBM to improve open source analytics for the company. Through the integration with IBM’s Project DataWorks, Data Scientists and Data engineers can now work on building analytic and machine learning models in Apache Spark environment using Python and R.

In this deep learning project, we will predict customer churn using Artificial Neural Networks and learn how to model an ANN in R with the keras deep learning package.
View Project Details