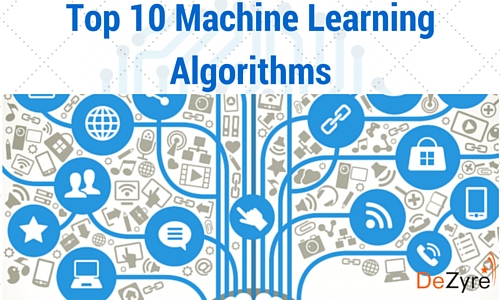 Machine Learning algorithms are classified as –

It would be difficult and practically impossible to classify a web page, a document, an email or any other lengthy text notes manually. This is where Naïve Bayes Classifier machine learning algorithm comes to the rescue. A classifier is a function that allocates a population’s element value from one of the available categories. For instance, Spam Filtering is a popular application of Naïve Bayes algorithm. Spam filter here, is a classifier that assigns a label “Spam” or “Not Spam” to all the emails.

Naïve Bayes Classifier is amongst the most popular learning method grouped by similarities, that works on the popular Bayes Theorem of Probability- to build machine learning models particularly for disease prediction and document classification. It is a simple classification of words based on Bayes Probability Theorem for subjective analysis of content.

1.1. When to use Naive Bayes Classifier algorithm? 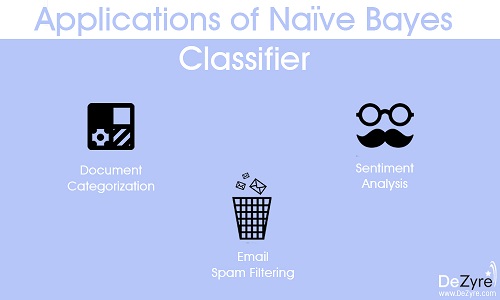 K-means is a popularly used unsupervised machine learning algorithm for cluster analysis. K-Means is a non-deterministic and iterative method. The algorithm operates on a given data set through pre-defined number of clusters, k. The output of K Means algorithm is k clusters with input data partitioned among the clusters.

K Means Clustering algorithm is used by most of the search engines like Yahoo, Google to cluster web pages by similarity and identify the ‘relevance rate’ of search results. This helps search engines reduce the computational time for the users.

Support Vector Machine is a supervised machine learning algorithm for classification or regression problems where the dataset teaches SVM about the classes so that SVM can classify any new data. It works by classifying the data into different classes by finding a line (hyperplane) which separates the training data set into classes. As there are many such linear hyperplanes, SVM algorithm tries to maximize the distance between the various classes that are involved and this is referred as margin maximization. If the line that maximizes the distance between the classes is identified, the probability to generalize well to unseen data is increased.

3.1. SVM’s are classified into two categories

SVM is commonly used for stock market forecasting by various financial institutions. For instance, it can be used to compare the relative performance of the stocks when compared to performance of other stocks in the same sector. The relative comparison of stocks helps manage investment making decisions based on the classifications made by the SVM learning algorithm.

Apriori algorithm is an unsupervised machine learning algorithm that generates association rules from a given data set. Association rule implies that if an item A occurs, then item B also occurs with a certain probability. Most of the association rules generated are in the IF_THEN format. For example, IF people buy an iPad THEN they also buy an iPad Case to protect it. For the algorithm to derive such conclusions, it first observes the number of people who bought an iPad case while purchasing an iPad. This way a ratio is derived like out of the 100 people who purchased an iPad, 85 people also purchased an iPad case. 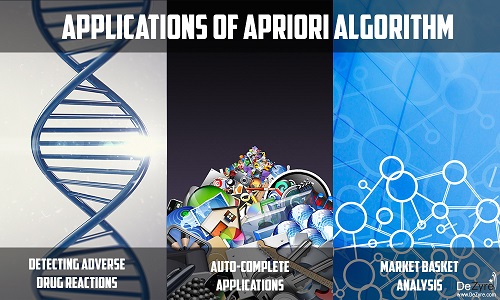 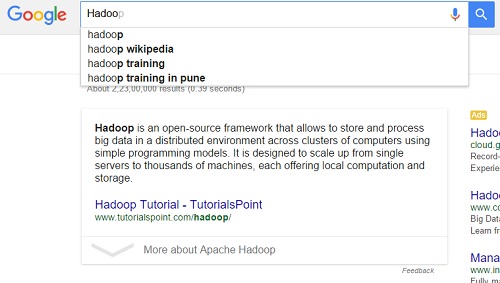 The name of this algorithm could be a little confusing in the sense that Logistic Regression machine learning algorithm is for classification tasks and not regression problems. The name ‘Regression’ here implies that a linear model is fit into the feature space. This algorithm applies a logistic function to a linear combination of features to predict the outcome of a categorical dependent variable based on predictor variables.

The odds or probabilities that describe the outcome of a single trial are modelled as a function of explanatory variables. Logistic regression algorithms helps estimate the probability of falling into a specific level of the categorical dependent variable based on the given predictor variables.

Let us consider a simple example where a cake manufacturer wants to find out if baking a cake at 160°C, 180°C and 200°C will produce a ‘hard’ or ‘soft’ variety of cake ( assuming the fact that the bakery sells both the varieties of cake with different names and prices). Logistic regression is a perfect fit in this scenario instead of other statistical techniques. For example, if the manufactures produces 2 cake batches wherein the first batch contains 20 cakes (of which 7 were hard and 13 were soft ) and the second batch of cake produced consisted of 80 cakes (of which 41 were hard and 39 were soft cakes). Here in this case if linear regression algorithm is used it will give equal importance both the batches of cakes regardless of the number of cakes in each batch. Applying a logistic regression algorithm will consider this factor and give the second batch of cakes more weightage than the first batch.

6.2. When to Use Logistic Regression Machine Learning Algorithm

You are making a weekend plan to visit the best restaurant in town as your parents are visiting but you are hesitant in making a decision on which restaurant to choose. Whenever you want to visit a restaurant you ask your friend Tyrion if he thinks you will like a particular place. To answer your question, Tyrion first has to find out, the kind of restaurants you like. You give him a list of restaurants that you have visited and tell him whether you liked each restaurant or not (giving a labelled training dataset). When you ask Tyrion that whether you will like a particular restaurant R or not, he asks you various questions like “Is “R” a roof top restaurant?” , “Does restaurant “R” serve Italian cuisine?”, “Does R have live music?”, “Is restaurant R open till midnight?” and so on. Tyrion asks you several informative questions to maximize the information gain and gives you YES or NO answer based on your answers to the questionnaire. Here Tyrion is a decision tree for your favourite restaurant preferences.

Regression Trees-When the response or target variable is continuous or numerical, regression trees are used. These are generally used in predictive type of problems when compared to classification. 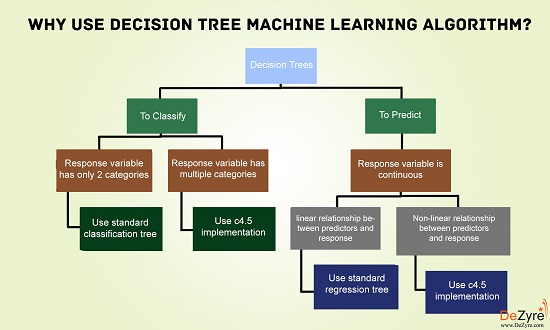 7.2. Why should you use Decision Tree ML algorithm?

7.3. When to use Decision Tree Machine Learning Algorithm> 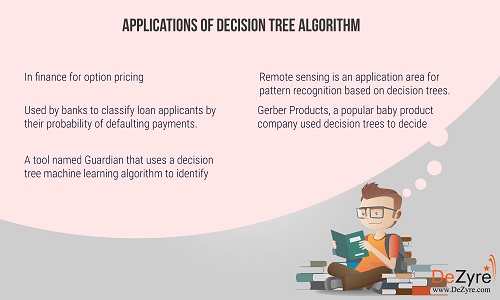 Let’s continue with the same example that we used in decision trees, to explain how Random Forest Machine Learning Algorithm works. Tyrion is a decision tree for your restaurant preferences. However, Tyrion being a human being does not always generalize your restaurant preferences with accuracy. To get more accurate restaurant recommendation, you ask a couple of your friends and decide to visit the restaurant R, if most of them say that you will like it. Instead of just asking Tyrion, you would like to ask Jon Snow, Sandor, Bronn and Bran who vote on whether you will like the restaurant R or not. This implies that you have built an ensemble classifier of decision trees - also known as a forest.

Human brain has a highly complex and non-linear parallel computer which can organize the structural constituents i.e. the neurons interconnected in a complex manner between each other. Let us take a simple example of face recognition-whenever we meet a person, a person who is known to us can be easily recognized with his name or he works at XYZ place or based on his relationship with you. We may be knowing thousands of people, the task requires the human brain to immediately recognize the person (face recognition).Now, suppose instead of the human brain doing it, if a computer is asked to perform this task.  It is not going to be an easy computation for the machine as it does not know the person. You have to teach the computer that there are images of different people. If you know 10,000 people then you have to feed all the 10,000 photographs into the computer. Now, whenever you meet a person you capture an image of the person and feed it to the computer. The computer matches this photograph with all the 10,000 photographs that you have already fed into the database. At the end of all the computations-it gives the result with the photograph that best resembles the person. This could take several hours or more depending on the number of images present in the database. The complexity of the task will increase with increase in the number of images in the database. However, a human brain can recognise it instantly.