There is no simple way to compare both Pig and Hive without digging deep into both in greater detail as to how they help in processing large amounts of data. This post compares some of the prominent features of Pig Hadoop and Hive Hadoop to help users understand the similarities and difference between them.

Hadoop technology is the buzz word these days but most of the IT professionals still are not aware of the key components that comprise the Hadoop Ecosystem. Not only this, few of the people are as well of the thought that Big Data and Hadoop are one and the same.

Just before we jump on to a detailed discussion on the key components of the Hadoop Ecosystem and try to understand the differences between them let us have an understanding on what is Hadoop and what is Big Data.

What is Big Data and Hadoop?

Any other form of data that cannot be categorized as Structured or semi-structured is referred to as Unstructured Data, for instance, the data from Social Networking websites or the web logs which cannot be analyzed or stored for processing in the databases are examples of unstructured data.

We generally refer to Unstructured Data as “Big Data” and the framework that is used for processing Big Data is popularly known as Hadoop. 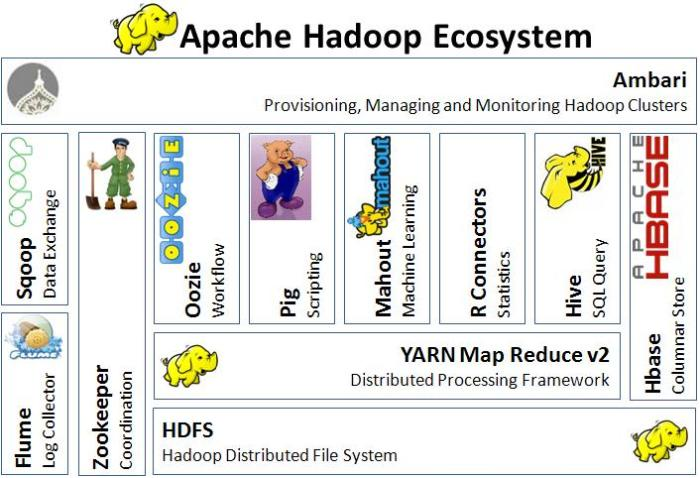 In this post we will discuss about the two major key components of  Hadoop i.e. Hive and Pig and have a detailed understanding of the difference between Pig and Hive.

Is the battle HIVE vs PIG real? Does the pair have the same advantages and disadvantages while processing enormous amounts of data? The answer is NO, there is no HIVE vs PIG in the real world, it’s just the initial ambiguity on deciding the tool which suits the need. HIVE Query language (HiveQL) suits the specific demands of analytics meanwhile PIG supports huge data operation. PIG was developed as an abstraction to avoid the complicated syntax of Java programming for MapReduce. On the other hand HIVE QL is based around SQL, which makes it easier to learn for those who know SQL. AVRO is supported by PIG making serialization faster. When it really boils down on taking decision between Pig and Hive, the suitability of the each component for the given business logic must be considered and then the  decision must be taken.

Just as there is a HIVE vs PIG, there is continued discussion on Hbase vs HIVE. This uncertainty can easily be justified by taking the representation of Hadoop ecosystem. Hbase covers more vertical than HIVE. So there is no Hbase vs HIVE. With deeper insight, HIVE uses queries which will later be converted to ensemble MapReduce technique to do operations on the database, at the same time Hbase works on the HDFS directly, although Hbase and HIVE work on structured database.

Hive Hadoop was founded by Jeff Hammerbacher who was working with Facebook. (Click here to Tweet) When working with Facebook he realized that they receive huge amounts of data on a daily basis and there needs to be a mechanism which can store, mine and help analysis of the data. This idea to mine and analyze huge amounts of data gave birth to Hive. It is Hive that has enabled Facebook to deal with 10’s of Terabytes of Data on a daily basis with ease. (Click here to Tweet)

Hive uses SQL, Hive select, where, group by, and order by clauses are similar to SQL for relational databases.  Hive lose some ability to optimize the query, by relying on the Hive optimizer.

Hive is similar to a SQL Interface in Hadoop. The data that is stored in HBase component of the Hadoop Ecosystem can be accessed through Hive. Hive is of great use for developers who are not well-versed with the MapReduce framework for writing data queries that are transformed into Map Reduce jobs in Hadoop.

We can consider Hive as a Data Warehousing package that is constructed on top of Hadoop for analyzing huge amounts of data. Hive is mainly developed for users who are comfortable in using SQL. The best thing about Hive is that it conceptualizes the complexity of Hadoop because the users need not write MapReduce programs when using Hive so anyone who is not familiar with  Java Programming and Hadoop API’s can also make the best use of Hive.

We can summarize Hive as:

a) A Data Warehouse Infrastructure

c) Provides us with various tools for easy extraction, transformation and loading of data.

Pig Hadoop was developed by Yahoo in the year 2006 so that they can have an ad-hoc method for creating and executing MapReduce jobs on huge data sets. The main motive behind developing Pig was to cut-down on the time required for development via its multi query approach. Pig is a high level data flow system that renders you a simple language platform popularly known as Pig Latin that can be used for manipulating data and queries.

Pig is used by Microsoft, Yahoo and Google, to collect and store large data sets in the form of web crawls, click streams and search logs. Pig at times finds its usage in ad-hoc analysis and processing of information.

Difference between  Pig and Hive

The below tabular data will give you an overview on the basic difference between Pig and Hive:

Instead of writing Java code to implement MapReduce, one can opt between Pig Latin and Hive SQL languages to construct MapReduce programs. Benefit of coding in Pig and Hive is - much fewer lines of code, which  reduces the overall development and testing time.

Difference between pig and hive is Pig needs some mental adjustment for SQL users to learn.  Pig Latin has many of the usual data processing concepts that SQL has, such as filtering, selecting, grouping, and ordering, but the syntax is a little different from SQL (particularly the group by and flatten statements!).

Hive is commonly used at Facebook for analytical purposes.  Facebook promotes the Hive language. However, Yahoo! is a big advocate for Pig Latin.  Yahoo! has one of the biggest Hadoop clusters in the world.  Their data engineers use Pig for data processing on their Hadoop clusters. Alternatively, you may choose one among Pig and Hive at your organization, if no standards are set.

Data engineers have better control over the dataflow (ETL) processes using Pig Latin, especially with procedural language background. A data analyst finds that one can ramp up on Hadoop faster, by using Hive, especially with previous experience of SQL.  If you really want to become a Hadoop expert, then you should learn both Pig and Hive for the ultimate flexibility. 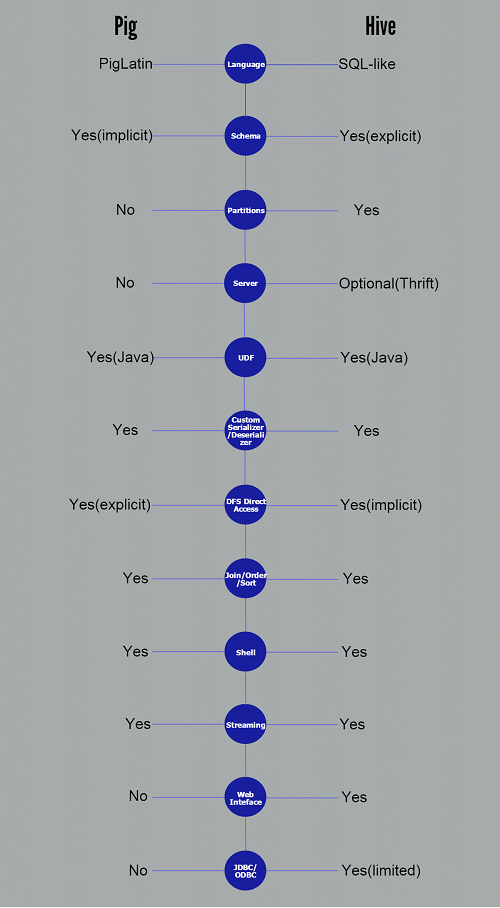 Depending on your purpose and type of data you can either choose to use Hive Hadoop component or Pig Hadoop Component based on the below differences :

6) Hive Hadoop Component is helpful for ETL whereas Pig Hadoop is a great ETL tool for big data because of its powerful transformation and processing capabilities.

7) Hive can start an optional thrift based server that can send queries from any nook and corner directly to the Hive server which will execute them whereas this feature is not available with Pig.

8) Hive directly leverages SQL expertise and thus can be learnt easily whereas Pig is also SQL-like but varies to a great extent and thus it will take some time efforts to master Pig.

9) Hive makes use of exact variation of the SQL DLL language by defining the tables beforehand and storing the schema details in any local database whereas in case of Pig there is no dedicated metadata database and the schemas or data types will be defined in the script itself.

11) Pig supports Avro whereas Hive does not.

13) Pig Hadoop Component renders users with sample data for each scenario and each step through its “Illustrate” function whereas this feature is not incorporated with the Hive Hadoop Component.

15) You can join, order and sort data dynamically in an aggregated manner with Hive and Pig however Pig also provides you an additional COGROUP feature for performing outer joins.

16) Pig and Hive QL are not turing complete unless extended with Java UDF's.

17) Apache Pig is the most concise and compact language compared to Hive.

Apache Pig is usually more efficient than Apache Hive as it has many high quality codes. When implementing joins, Hive creates so many objects making the join operation slow. Here are the results of Pig vs. Hive Performance Benchmarking Survey conducted by IBM –

The results of the Hive vs. Pig Benchmarking Survey revealed Pig consistently outperformed Hive for most of the operations except for grouping of data.

To conclude with after having understood the differences between Pig and Hive, to me both Hive Hadoop and Pig Hadoop Component will help you achieve the same goals, we can say that Pig is a script kiddy and Hive comes in, innate for all the natural database developers. When it comes to access choices, Hive is said to have more features over Pig. Both the Hive and Pig components are reportedly having near about the same number of committers in every project and likely in the near future we are going to see great advancements in both on the development front.

How to learn Hadoop online?